We condemn in the strongest terms the heinous remark by the two BJP of
India politicians against the Prophet of Islam.

Insulting the Prophet p.u.h is a red line. Muslims relate to their Prophet as the cardinal of their faith , their saviour , their paramount leader that has imparted the revelation from Allah All Mighty , their ultimate perfection of a human being , their uncompromising love and complete veneration to him.

Insulting the Prophet is an assault to all Muslims. They will not tolerate any attempt to denigrate the Prophet.

The obvious statements insulting the Prophet Muhammad p.u.h and his wife , Saidatina Aisyah r.a.h in public by the BJP politicians were not because of ignorance but a provocation to challenge the Muslims and to denigrate Islam.

BJP politicians with their deep feeling of hate against Muslim minorities have in many occassions , pronounced openly their animosity towards Muslims. BJP’s stance is a reflection of the Hindutva ideology promoted by the nationalist group RSS which has been the master mind behind the national agenda of total Hindunization of India.

The open attacks against the Prophet is a provocation aimed to intimidate the Muslims and justify any crackdown on Muslims if there is a violent response
from the Muslims.

India , under the BJP rule , has been condoning hate speeches resulting in attacks against Muslims.

Of late there has been an upsurge of mob lynching cases targeting Muslims and storming of Muslim houses in India by cow vigilante groups.

The open call to kill Muslims in India was declared in an event of nationalist right wing Hindus.

India has now become a dangerous country for Muslims.

The subsequent violent incidences and attacks on Muslim homes , shops and mosques have escalated by more hate speeches encouraged by BJP political and religious leaders.

Banning of hijap , friday prayers and azan are now actions taken by nationalist groups. Recently , calls to demolish mosques claimed as sites of Hindu temples have been filed in the courts.

The public derogatory remarks against the Prophet by the two BJP politicians is the culmination of an Islamophobic campaign condone by the BJP government.

Although the two BJP politicians were dismissed by the BJP as a show of stern action , the underlying hate campaign is still strong and spreading because all indications shows the Hindutva ideology will be a central foundation for the Indian government.

India is moving towards a dangerous path as what some western countries are imposing on minority Muslims. The case of Denmark and France embracing a strong Islamophobic policy is noe embraced by India. It will not augur well for a constructive engagement with Muslim nations.

We call for a diplomatic action be taken by all OIC countries to stop India from proceeding its provocative and demonisation of Islam. OIC needs to state a firm stance to boycott all trade relations with India if no action is taken against the hate and violent attacks against Muslims and Islamic institutions.
.
We call all Muslims globally to respond to the Indian government in registering their condemnation on the insult directed to the Prophet p.u h.

WORLD REFUGEE DAY – PROTECTION AND COMPASSION FOR REFUGEES IS PARAMOUNT 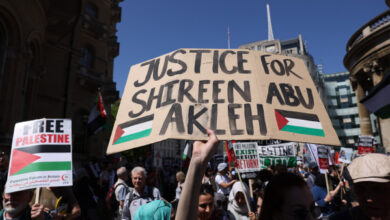