We hereby launch the Save the Mosque Campaign in Xinjiang (East Turkistan) and in China as a whole.

We reaffirm our serious concern over the actions of the Chinese government which has launched the Sinosization agenda of religion and Islamic houses of worship in particular.

We reject outright the Chinese government’s campaign that systematically and intentionally changes the Uyghur cultural heritage in the Xinjiang Autonomous Region (XUAR) as well as eroding Islamic elements to be subjugated to China’s image completely.

We are aware that the abundance of information about the removal of thousands of mosques , that can be traced from statelite imagery, however is still denied by China.

But the number of mosques that were either destroyed or damaged is still a fact that cannot be easily ignored.

A thorough study by bodies such as International Cyber ​​Policy from the Australian Strategic Policy Institute in 2020 as well as Ughurism.com with the Uyghur Human Rights Project in 2019, specifically revealing about the destruction of mosques in Xinjiang and many other provinces in China, shows some hard concrete evidence that is difficult to denied.

From the study carried out, many mosques were detected to have been destroyed or damaged by the Chinese authorities.

According to the study report, using satellite images, an estimated 16,000 mosques in Xinjiang (65% of the total number of mosques) have been destroyed or damaged as a result of Chinese government policy, most since 2017. An estimated 8,500 were destroyed in total, and for most mosque sites which was destroyed, the land is still empty.

Another 30% of the sacred Islamic locations (shrines, cemeteries, roads to places of pilgrimage of many Muslims, including those protected by Chinese law, have also been destroyed since 2017.

From the claim that there are 24,000 mosques in China, the study revealed that the mosques had been destroyed including the mosque dome which was removed because the Chinese did not allow Islamic symbols to be displayed.

Meanwhile, the report also revealed that many mosques were closed and also included some mosques that were converted into cafes.

In addition, there are mosques whose structure has been changed to have a more Chinese image to meet the characteristics and requirements of the country’s national culture.

We are of the opinion that the agenda of removing the religious symbols of Islamic culture in China is not only against the Universal Declaration of Human Rights but also against the constitution of the Chinese state itself.

We oppose the Chinese government’s harsh intervention approach that seeks to radically change the identity of the Mosque and Islamic culture among Uyghurs in particular and Muslims in general in Xinjiang and other Chinese Provinces.

It is a totally unacceptable act to target the Mosque in China’s agenda of hunting down so-called Uyghur terrorists and separatists.

The attitude of the Chinese government’s prejudice against Muslims with its harsh approach and disregard for rights and justice is no different from the attitude of deep Western powers with baseless Islamophobic sentiments.

We also deeply regret and condemn the damage and destruction of places glorified by Muslims such as Islamic cemeteries and shrines.

Reports of the Quran being burned and religious schools being ordered to close also signal extreme action to completely eradicate Islam in China.

We urge the Chinese government to allow an independent investigation to be conducted to determine the truth of the incident.

We remind the Chinese government that its attitude of oppressing the rights of Uyghur Muslims and other minority Muslims in China will not be left without a proper response.

Mosques belong to all Muslims. Damaging and destroying Mosques in Xinjiang and elsewhere means an assault on the sensitivities of Muslims around the world.

It is our responsibility to speak out and express our opposition when any Mosque is invaded , let alone insulted.

The Chinese government needs to understand the actions it takes when it comes to the dignity of Islam because the patience of Muslims has limits.

President of the Consultative Council of Islamic Organizations of Malaysia

STRANGULATION OF KASHMIR ECONOMY BY THE INDIAN OCCUPATION 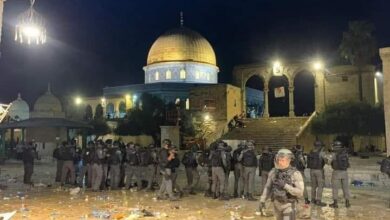